From telephone card to video calling

As a child, Rawen Ahmed did not dream about becoming a distribution specialist in b2b marketing at VodafoneZiggo. Nevertheless, he was destined to come and work for us. From the very first phone card his mother bought, he was hooked on telecom.

In the weekends, Rawen video calls with his aunt in Iraq. A fixed routine, he with his two-year old daughter on this side, his aunt with her four-year old daughter on the other. "The girls have never met in person, but in this way they see each other grow up. She knows us and we know her", Rawen proudly explains. "Without telecom and its evolution this would not have been possible." Therefore, if there is anyone convinced of the possibilities of telecom, it must be Rawen. It’s for good reason he now works for VodafoneZiggo. 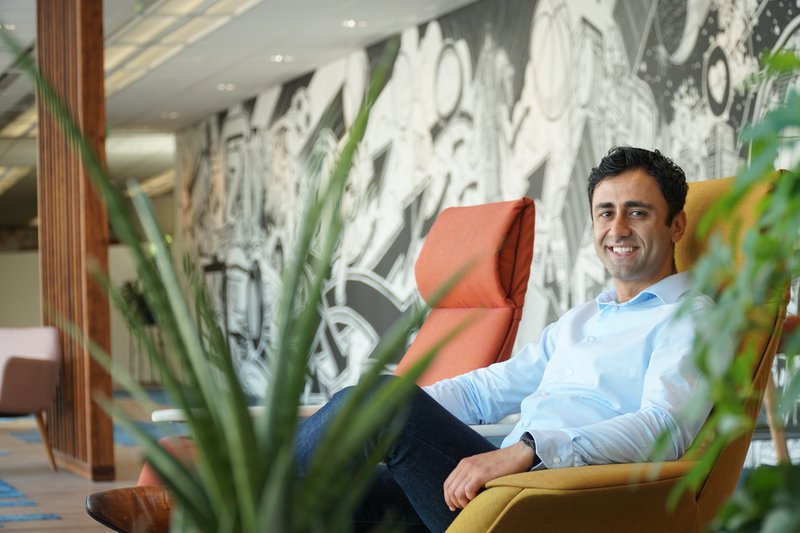 Telephone card for the home front
Shortly after the Gulf War of 1990-1991, Rawen flees from Iraq to the Netherlands, together with his parents, his older and his younger brother. He is more than six years old when he arrives in the Netherlands. "I don’t really recall our flight, but I do remember a lot about our initial time in the Netherlands. And I can still picture the first telephone card my mother bought. She took me with her to a phone booth and with a coin she scratched out the code on the card. Through a special telephone number it provided access to an international line. And then, magic. The Iraq we had left behind, came back to life again in that phone booth, through the voices of our distant relatives. For the first time, we could tell them how we had fared and where we had ended up in the end. To us, it was not just communication, but also warmth, love and attention."

Déjà-vu
Since that first card, Rawen kept all the telephone cards his mother bought to call their relatives. When he was sixteen he worked in an internet shop and sold the cards to people who would call their friends and family abroad. "They used those cards there in special phone booths. Often enough I witnessed someone emerging all emotionally, exactly like we had ten years before. Only then did I realise what telecommunication can mean to people. It was only an after-school job of course, but it has had a major impact on my choices later in life. For me, telecommunication runs deep." As a student, Rawen worked in several telephone shops, among which a Vodafone shop. After his psychology study, he worked as a consultant for a few years, at Heineken and in health care for example. "I learned a lot during that time, but I also noticed that if you’re not selling a product from the heart, that line of work is not what really suits you. For that reason I went after a job in telecom."

Proud of telecom
Rawen has been working at VodafoneZiggo for two years now. "Of course, I’m no longer involved in selling telephone cards, but I am in sales, like I was as a teenager. It’s just that now, I’m also allowed to think up sales strategies. That combination is great. I’m really happy here, since I’m helping people connect. That is what telecommunication does – and each year better. Nowadays, refugees probably stay in touch with the home front along the way. People living in a war zone have more opportunities now to share what’s going on through the internet. And being able to see my family in Iraq by simply pushing a button makes me proud. Proud I’m working in this industry."

"A strong culture puts us ahead of the game"