Stories
"Here, I can be myself: non-binary"

"Here, I can be myself: non-binary"

Colleague Mich de Vocht is non-binary and tells how our focus on diversity and inclusion helped determine their choice for VodafoneZiggo, how they discovered their own gender identity and why they find a coming out strange.

A brand to be a fan of
Corona played an important role in their career switch, says Mich: "By working from home, I discovered that I did not find my work challenging enough. Because of the absence of the office and colleagues, I realised that I wanted to work for a brand that I could also be a fan of within my private life. Moreover, I missed the space to be myself at my previous employer. I've now been working here for over two months, with a great deal of pleasure, as Senior Content Editor in the B2C Digital department."

Gender? Not a factor
"The video in which Jeroen Hoencamp comes out of the closet as a heterosexual had already attracted my attention earlier," they continue. VodafoneZiggo published this video on social media, to support the LGBT+ community. "I thought it was very cool to see a CEO participate in that. That and the existence of a Diversity & Inclusion team and the Queers Connected network showed me that the themes of diversity and inclusion are really taken seriously here. I liked the fact that gender did not play a role in my application or in my contract and I was also excited by the presence of gender-neutral toilets in the office. That gave me the confidence that I could be myself here. Together with the challenging position, that ultimately determined my choice."

Recognition at last
Mich's search for their own gender identity took many years, they say: "I never felt like a woman. Even in primary school, but it seemed like those feelings were not allowed to be there and so I put them away. In secondary school, I came out of the closet as a lesbian, but that word never suited me, because it felt too feminine for me. "I attributed the feelings I had in primary school to the search for my sexuality. Two years ago, however, I saw Thorn Vineyard on Instagram and read the word 'non-binary' for the first time. This was exactly how I had been feeling all these years. I finally had a word for it, but more importantly, the recognition that my feelings were valid."

Everything is relative
"With that realisation came the confidence that I could really be myself towards others," says Mich. "That feels really liberating, but unfortunately there are always people who feel the need to comment on it. It is sad to see all the hate on the street and on social media. But the feeling is double, because at the same time I am very grateful that I live in a country like the Netherlands, where the law is on my side. My partner comes from the Middle East and that puts everything into perspective. If you come out of the closet there, you really are in mortal danger." 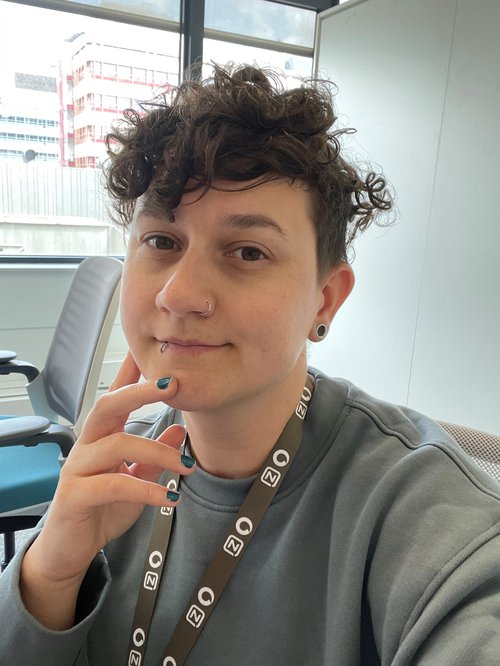 A lifelong process
A coming out was not necessary for them, says Mich: "I kept the struggle with my gender identity to myself for about ten years. I did not feel like a woman, but also not a man. That made it difficult at first. Once I knew I was non-binary, I told people that when it came up. So that came quite naturally. But it is a lifelong process. For example, I changed my name and pronouns later on. At this moment, I feel comfortable with the term non-binary, but that can always change. After all, gender and sexuality are fluid."

Visibility, recognition and acknowledgement
"A coming out is actually a ridiculous concept in my opinion," they say. "Why should anyone have to tell the whole world who they are or who they like? But I do think that this day is very important for visibility. If I had seen a non-binary person on TV 10 years earlier, it would have helped me a lot personally. Visibility, recognition and acknowledgement, that's what it's all about."

Break the habit
Mich continues: "It is annoying that heteronormative and binary thinking is so dominant in our society. Asking a woman if she has a boyfriend instead of a relationship or asking pregnant people if it is a boy or girl, is strange in my opinion. After all, in the latter case, it says nothing about the character, interests or taste of the child. On the one hand, I understand very well that people are used to terms like 'ladies and gentlemen', 'father and mother' and so on. But on the other hand, it is a missed opportunity if we do not use neutral terms like 'people' or 'parents'. Such a binary distinction only puts people in boxes. It would be nice if we could break this habit and such labels would no longer be necessary for toilets, toys and clothes, among other things."

Mich concludes, "If we as a society did not think in such a binary and heteronormative way, it would be much freer for everyone. Non-binary people would feel more accepted and included, while the terms would not be uncomfortable for men or women. Moreover, it would provide space for everyone to live without prejudice and without unnecessary and unjustified expectations. It should not matter what gender you are, who you fall in love with or what colour your skin is. It would be nice if people could just be people."

Learn more about our company culture

Are you going to be VodafoneZiggo’s Scrooge McDuck when you’re older?

Working optimally with a disability

Learning in the land of the blind