Stories
"Everything is broken, blown away or fallen down"

"Everything is broken, blown away or fallen down"

Two days after the devastating hurricane, Harm flies to the disaster area, together with an international team of the Vodafone Foundation consisting of Walter Saunders (Scotland), Robert Toth (Hungary) and Salvador Perez (Spain). They land on the French island of Guadeloupe, the place they can reach the most quickly, which is also nearest to the stricken islands of Saint Martin, St. Barts and the Virgin Islands.

Chaos and devastation
Soon enough they receive permission to stay with the Dutch military on Saint Martin and operate from there. But as a result of the chaos and the ruined infrastructure, it seems impossible to travel from Guadeloupe to the stricken island. Ports and airports have been damaged to such an extent that only limited military transport is possible.

Frustrating
Harm recounts: "We used our time at Guadeloupe well by testing all the systems and preparing ourselves. Still, it's a very frustrating feeling when you are 'stuck' on Guadeloupe." On the VodafoneZiggo side, numerous colleagues were helping to find a solution, for example by using their connections at ministries. It was only on Tuesday 12 September that the message was received that the group could join a French military transport and fly to Saint Martin the following day.

Heaps of roof sheets
On Saint Martin the team was dropped at a totally devastated airfield. "It was one smashed up area, with hundreds of soldiers, surrounded by heaps of twisted roof sheets and other wreckage", Harm recalls. "Everything you see, is broken, blown away or fallen down. The lines of people leaving the island, remind you of homeless refugees. And even though it gives you something of a shock, there is no time to dwell upon it, since we have to move to a safe location as soon as possible with four people and hundreds of kilos of valuable material."

Waiting in a hot tent
Due to the chaotic situation it takes until it's dark before transport can be arranged to the operating base at the other side of the island. During the first two days on Saint Martin the team is not allowed to start installing the emergency systems and has to wait for permission and transportation. Harm: "It was very hot and we slept in small tents without any luxuries, no air conditioning, no shower and emergency rations for food. Difficult days, especially because you want to get cracking, but can't do a thing." 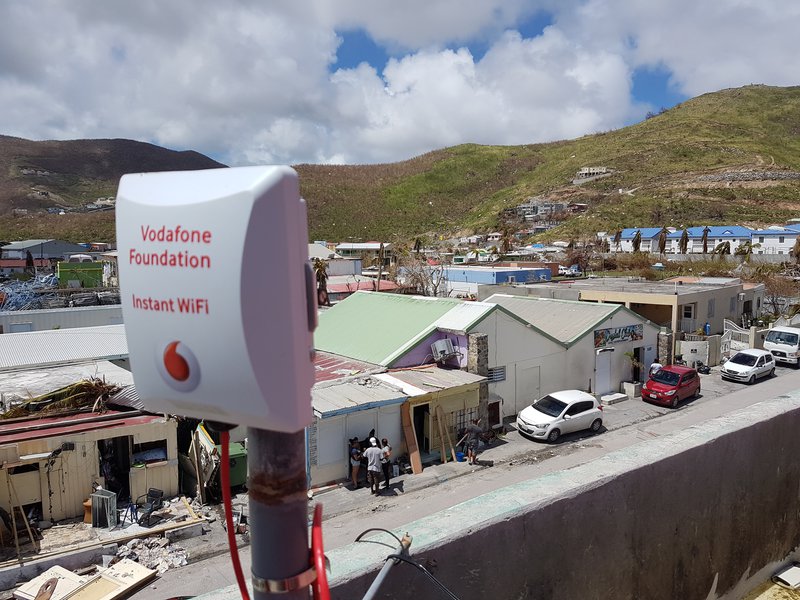 Wi-Fi for the Red Cross and islanders
"On Saturday 16 September, my daughter's birthday, things suddenly move rapidly. We get into contact with an enthusiastic couple of the local telecommunication regulatory body. That day we install a Wi-Fi network for employees of the Red Cross, enabling relief workers to make contact again. We also decide on the locations where the other networks will be installed. In the following days, we install instant chargers at the two Red Cross locations, capable of charging 60 smartphones simultaneously. We replace a blown down GSM mast by our emergency mast, we install a satellite dish for an internet connection and we build two free Wi-Fi spots for the islanders. It is a great feeling when you see how many people use those Wi-Fi spots that very same day."

Journey back in military plane
On Monday 18 September the next hurricane is predicted, Maria. As a precaution, the team removes the satellite dish. The men spend two nights in a crowded conference room, where the Dutch police also seeks shelter. From there, options are reviewed for the return journey to the Netherlands, since there are no 'normal planes' flying from Saint Martin. Harm: "Eventually, on Tuesday night we get notified that we can leave for Curaçao with a German military plane. We rise early on Wednesday 20th to put the satellite dish back in place and check on the other installations." 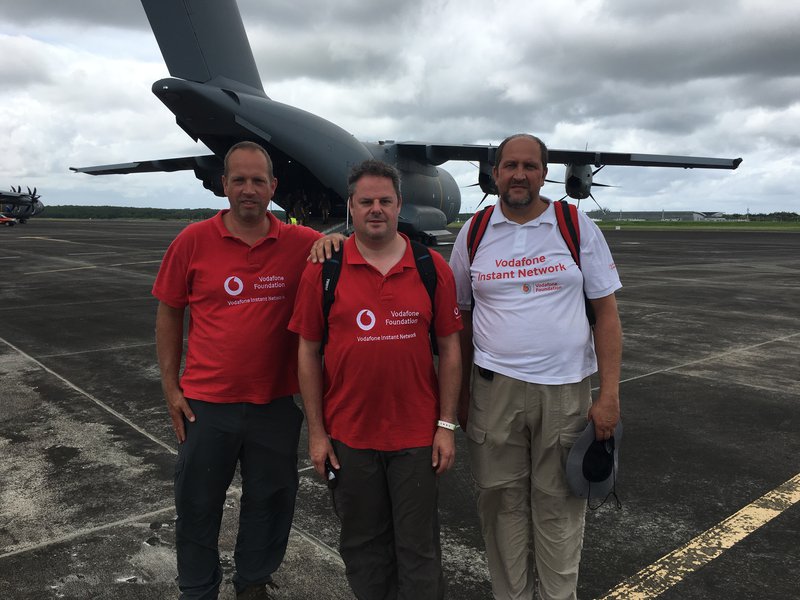 Great adventure
A few days later the men are home again, tired but satisfied. Harm: "I participated in previous projects by the Vodafone Foundation, to refugee camps in Kenya and Greece, but this mission to Saint Martin was much more demanding and intense. The extremely sudden departure, the many long waits, circumstances on the island and the constant dealing with uncertainties have taken its toll. But the satisfaction you feel when you look back at what we have managed to accomplish with this team for the people of Saint Martin, and the unique circumstances, make this into an experience I will remember for the rest of my life as a great adventure."