Stories
Drones inspect building damage with the help of 5G

Drones inspect building damage with the help of 5G

Combat rust and cracks in structures in real-time

Power plants, bridges, refineries, gas fields. Industrial environments and objects must be safe. Therefore, they are regularly inspected; for rust, for example, or cracks in the structure or coating. Visual inspections are expensive, time consuming and unsafe. You have to put scaffolding or aerial work platforms in place, have inspectors abseil. And even then, the observations are subjective. That is why drones are being used more and more often, with which objects can be visualised faster, safer, and more efficiently. DroneQuest and Vliegend.nl have conducted a 5G pilot to investigate whether damage to buildings can be identified even faster with the assistance of AI, and whether photos can be forwarded in real time to the inspection team at the companies. VodafoneZiggo and the University of Groningen were the partners in this 5G pilot.

DroneQuest advises companies on drone inspections. Owner Simon Voogd: “We work with numerous operators who have fitted their drones with various types of cameras. Which camera is most suitable varies from object to object. The photos taken overlap each other. If a problem is detected somewhere, the images are combined and a 3D design is made, which sheds light on the problem.”

Serving customers even better
One of the companies DroneQuest works with is Vliegend.nl, which develops drone systems. With the emergence of the super-fast 5G mobile network, they both see opportunities to serve customers even better. They successfully applied for a grant from Economic Board Groningen to test the ideas within 5Groningen, the northern testing ground for 5G. “We wanted to investigate two things. Can we develop an AI algorithm that filters out only those photos which show damage? And can we forward these photos with the highest resolution via 5G to the inspection team at the companies, almost in real time, so that they can immediately indicate that the drone needs to zoom in closer on a suspicious situation?" says Voogd.

Super-fast downloading with 5G
Vliegend.nl fitted drones with all the necessary equipment. “We had to think about things such as cameras, computers and modems,” says Jan Wiersma of Vliegend.nl. “Technically, it was a challenge. Making the chain secure took a long time. Eventually, however, we were able to send the images over the network with the software we had written. 5G is ideal for super-fast downloads. Ultimately, we’d also like to upload super-fast, but unfortunately that isn’t possible yet," says Wiersma. Vodafone shared its expertise on how 5G works and connectivity. The University of Groningen set up a server that allows communication to go through 5G.

Watch the drone images live
“We have learned that 5G also has its limits. The AI algorithm works, which is already yielding lots of benefits. Watching the images from the drone live, however, is apparently still too futuristic," Voogd laughs. The 5G network is not yet available everywhere, so DroneQuest's trial was conducted via 4G-plus. Voogd would like to do another test in real 5G, in an indoor test location in the province of Groningen.

5Groningen opens doors
As a technical partner, Jan Wiersma looks back on the 5G pilot positively. “We have developed technology that works, but the network isn’t ready for it yet.” Simon Voogd: “What I had in mind isn’t quite possible yet. Even so, that in itself is useful information, and I can look back on a great project. We wouldn’t have been able to conduct this pilot, either financially or in terms of network, without a grant and the expertise of 5Groningen. Economic Board Groningen and its 5Groningen initiative have opened doors that I would have found difficult to open on my own.” 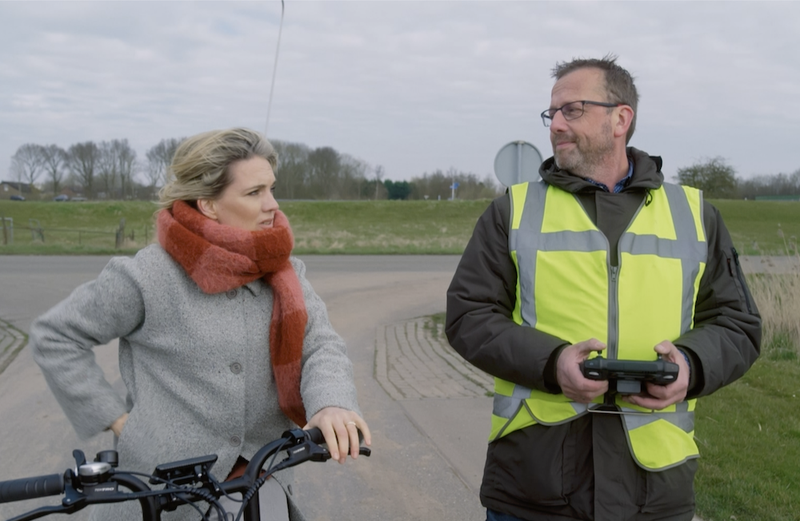 5G projects in the far north