From misunderstood teenager to great champion

Top athlete Tristan Bangma on the road to success

As a child, he was often mocked and picked on; Tristan Bangma (23) was different from the other kids. His eyesight was poor, so when he went out in the evening darkness, for instance, he used a stick. His talent for cycling helped him greatly through his difficult childhood. Today, he’s a Paralympic gold medallist and world champion. And thanks to 5G technology, he can even cycle solo again.

When he was eight years old, Tristan’s doctors diagnosed him with Optic Atrophy, a condition that leads to damage to the optic nerve. His vision was just 25% at the time. It was a diagnosis that was very hard for him to accept and come to terms with. Until midway through secondary school, Tristan felt misunderstood and was downcast and depressed. He could no longer play korfball and even cycling to school became impossible after a while. His vision gradually deteriorated to 1%. He and his father decided it was time to look in earnest into what he could do rather than could not. 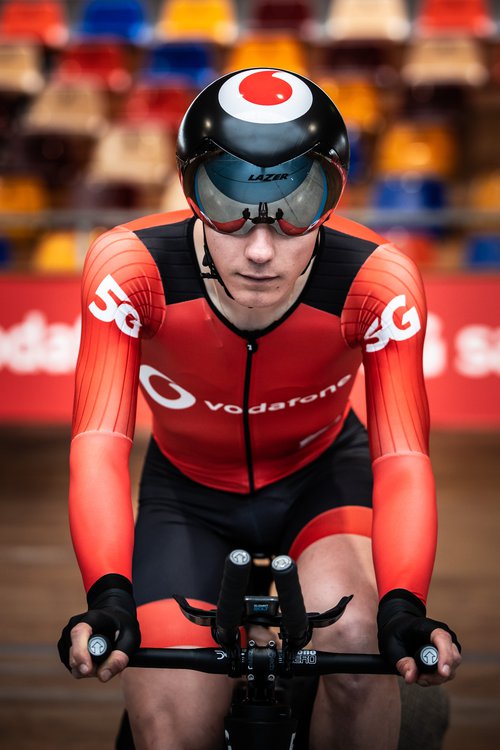 “I grasped gold”
“I was spoon-fed a passion for cycling,” explains Tristan. “My father didn’t actually participate in races, but he was an avid and very good cyclist. I remember going out on the road with him from a very young age. When I grew older and stronger, I realised I might have some talent. It was also a time when I was very much in search of myself. My teacher at school and my father showed me that I was by no means alone. In 2012, I decided to take part in a Paralympic talent day and was promptly selected to be on the team. Four years later, I won gold at the games in Rio de Janeiro with my tandem pilot Teun Mulder.”

Tristan added the world championship to his list of achievements in 2019, this time with pilot Patrick Bos. He triumphed over his opponents, but also over himself. “Those medals taught me that there’s always something positive that you can set your sights on. Even if achieving it seems impossibly far away. The best example of that fact is sitting right on front of you. I went from a very dark place to great heights and eventually, I grasped Paralympic gold. That’s why I like to tell people my story and speak at events, for instance. I hope that I can be an inspiration to others.

Ears for eyes
Tristan made it big on tandems, a sighted pilot always on the front seat. The pilot doesn’t just pedal like the best of athletes, he does the steering for Tristan, too. Thanks to 5G technology, things have changed. Despite his severe visual impairment, he can now navigate the velodrome on his own. Scanners on the front and rear of his bicycle map the track and relative location of the other cyclists. That information is sent through the VodafoneZiggo 5G network to a computer, which converts it into a 3D environment and an 8D audio signal. Tristan receives that signal in surround sound to his ear pods, enabling him to ‘see’ his immediate surroundings with his ears.

“As long as I stay on the black line, I hear nothing. But if I stray off it, I hear a loud sound in one of my ears, depending on the direction I’m straying. It’s like a rattling chain. The farther I stray off course, the louder the sound gets. And if someone overtakes me, I hear them going around me as if in a circular motion - that’s thanks to the 8D signal. It’s an absolutely amazing experience; it’s like a whole new world has opened up to me. It’s proof that if you think big, big things happen. Never believe anything to be impossible.”

Lots of opportunity
Tristan is pretty impressed with what can be done with VodafoneZiggo’s 5G technology already, but at the same time, he hopes that the system will be further developed so that other people can benefit from it, too. “Take Paralympic swimmers, for instance. When they reach the end of a length and have to do a turn, someone has to be there to tap them on the head. Maybe this technology can be applied there somehow, too. It also holds lots of opportunity for non-athletes. Who knows, 5G might soon be helping people with a visual impairment to go for a walk independently.”

VodafoneZiggo is donating the 5G technology Tristan cycles with to the Dutch disabled sports foundation Fonds Gehandicaptensport. This foundation wants sport to be a part of everyday life for everyone with a disability by 2030. This prototype will contribute to achieving that goal. The foundation intends to put it in action at sporting events, so that everybody can experience for themselves what this kind of technology makes possible for athletes with disabilities.

Setting new goals
Despite his young age, Tristan the athlete has already won just about everything there is to win. But he’s not done with winning just yet. “Getting the best out of myself every single day never ceases to thrill me. I’m still young, and it gives me so much pleasure. At the top, you have to endure the pain of the physical exertion you put yourself through, but the euphoria victory brings makes it so worthwhile. My dot on the horizon? The Paralympics in Tokyo next year. To be there, and to be there grasping gold again - I’ll do whatever it takes."

From trend follower to tornado chaser