Stories
VodafoneZiggo Comes Out of the Closet

VodafoneZiggo Comes Out of the Closet

Change starts with you

This year VodafoneZiggo celebrated a particularly special Coming Out Day. Our very own CEO Jeroen Hoencamp ‘came out of the closet’. And for good reason, because we are the first official partner of knowledge platform Corporate Queer. We are proud to work together for inclusion. The objective? Ensuring that all staff and customers can be themselves.

The Dutch are often regarded as progressive. "But that is not always the case in practice," says Remco Boxelaar. He is the founder of Corporate Queer, a knowledge platform that helps organisations to be more inclusive. "A glance at SCP's LGBTI monitor from 2018 isn’t particularly encouraging. LGBTI people are more likely to deal with disrespectful behaviour in the workplace than their heterosexual colleagues. This can range from annoying questions about their orientation and gender to requests to behave or dress differently. Many people in the LGBTI community therefore hide their sexuality and do not always feel safe or accepted at work." 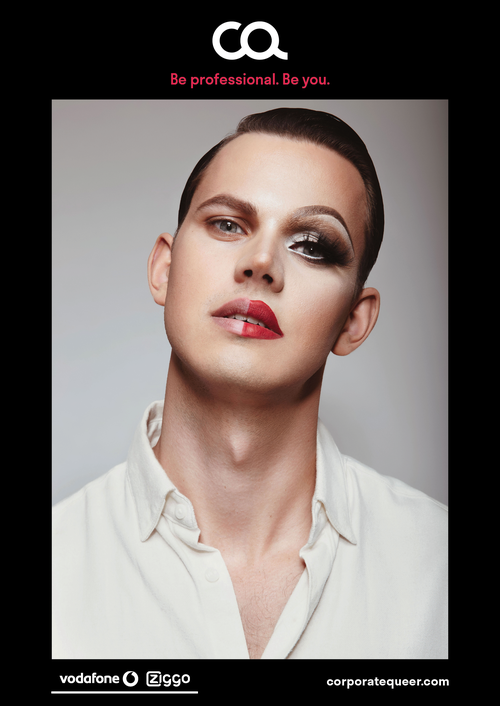 Queer Partner
"VodafoneZiggo understands that as an organisation you play an important role in the emancipation of LGBTI people. I’m very impressed by that," says Remco. "I am proud that they are Corporate Queer’s very first partner. Starting now, we will work every day on a more open mind among VodafoneZiggo employees. Ultimately, we want to reach all 7500 staff, through training, campaigns and events, at our head office, in our call centres and in our shops."

Open Mind
What does an open mind actually entail? "Truly putting oneself in another’s shoes, without judgement", says Remco. "That other person may well be someone with a different sexual orientation. But also someone with a different gender identity, such as someone who is transgender or non-binary. In other words: anyone who behaves or dresses differently than we traditionally expect from a man or a woman. By truly empathising with another, you can genuinely accept that person for who they are without asking any unacceptable questions."

LGBTI Ambassadors
Everyone belongs and can be themselves. Thanks to the partnership with Corporate Queer, this message is getting louder and is being expressed by more ambassadors at VodafoneZiggo. Staff who follow basic training on what it is to be LGBTI, for instance, and by managers who receive training on inclusive leadership. Remco: "We hope to recruit more ambassadors with our latest campaign, When Did You Know? CEO Jeroen Hoencamp kicks off with his own coming-out on video. Watch it below and judge for yourself: does it make you think?"

Wave of Change
Remco sees a wave of change spreading throughout VodafoneZiggo. From Customer Service no longer addressing customers as Mr or Mrs, to increased empathy shown by office staff towards their LGBTI colleagues. “Hopefully, our courses and campaigns will get people thinking. Perhaps with this article will," says Remco. “Do you know exactly when you became aware of your gender identity and sexual orientation, for instance? And what that discovery meant to you? Think about it, because change starts with you. By truly empathising with others, you ‘normalise’ them. Ultimately so normalised that LGBTI people simply become the norm. Hopefully we’ll get to a point where nobody has to come out any more."

Read more about the diverse and inclusive culture at VodafoneZiggo.

Young Generation Board: bridging the gap at VodafoneZiggo

Advancing together: government and education