"Drones are never stuck in traffic"

Unmanned delivery service by air with the help of 5G

Delivering urgent parcels using unmanned drones. For many people, this sounds like something from the future, but in the case of the 5Groningen project in the north of the Netherlands, this innovation is already airborne. Vodafone is on board as a partner.

The technology that enables drones to fly long distances unmanned has already entered the development phase. The first test flights have taken place, so it should soon become possible to deliver items such as urgent medical packages quickly and efficiently.

5Groningen testing ground
Entrepreneurs and non-profit organisations have got together with technical experts under the name 5Groningen, with a common aim: testing 5G applications. At the same time, they are expanding their knowledge about the Internet of Things (IoT), the technology that links devices together and connects them to the internet. 5Groningen is an initiative of Economic Board Groningen and is being sponsored by eleven partners. This testing ground in the far north of the country focuses on a diverse range of topics: care, energy, traffic, logistics, agriculture and the living environment. Vodafone has been involved as a partner in a variety of promising projects since 2017.

"A drone are not affected by traffic jams and can fly in a straight line from A to B", said Egbert Swierts, the originator of the 5G pilot project and co-owner of the Groningen-based company, OmniDrones. "Multiple drones are controlled from the control room. The first tests have now been completed and we successfully programmed the drone so it could be flown and controlled via a high-speed 5G connection." 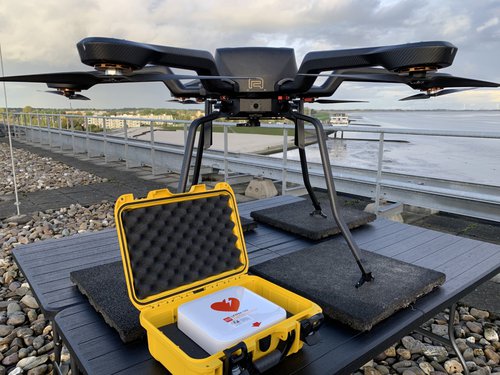 This makes BVLOS flying possible. BVLOS stands for Beyond Visual Line of Sight, or in other words: the pilot no longer has sight of the drone during flight. In the next phase, further telecommunication tests will be carried out to make sure it is possible to intervene remotely in the event of a fault or in case of an emergency. 5G makes it possible to initiate a real-time video connection between the drone and the control room. The partners involved in this 5G pilot project are Vliegend.nl, TNO and Vodafone.

The OmniDrones company first became active in the unmanned flight sector eight years ago. "In the beginning, we weren’t allowed to fly everywhere", explains Egbert Swierts. “Back then, we only flew above agricultural areas. Step by step, more and more became possible." Using only a transmitter, OmniDrones has successfully managed to fly a drone a few kilometres unmanned. "Covering larger distances than that isn’t possible yet, because objects get in the way that interfere with the connection, such as trees and buildings. 5G may offer a solution to that", according to Swierts.

Flight safety with the aid of 5G connectivity
Initial tests carried out on the Zernike site in Groningen have shown that it is possible to program a drone to fly long distances independently, while maintaining control of it via the connection. Keeping control of the drone is vital in order to ensure safety. In the event of a fault or in emergency situations, it must be possible to initiate a real-time connection in order to intervene remotely. 5G makes it possible to establish a fast connection of that type with hardly any latency. "As long as the control room and the drone are both connected to the telecommunications network, the distance itself is actually unlimited", according to Swierts. To make this type of telecommunication possible, Vliegend.nl has attached an additional 5G module to the drone. This technology comes from Vodafone.

Future
Because 5G has yet to be fully rolled out in the Netherlands, not everything can be tested yet. "All of the knowledge we are already building up at present is helping to ensure that these types of applications will be possible soon." Egbert Swierts predicts that in the future, it will be possible to control multiple drones from the control room. "Drones that fly autonomously over long distances can be used for a variety of purposes, such as delivering parcels, but also for inspection and security, for example."

5G projects in the far north